What happens when a car rolls over?

A vehicle rollover is aggressive in nature. This particularly violent crash occurs when the driver, the vehicle, the road, and weather conditions can all play a role in the accident. If the driver is acting erratic, the road is slippery and the weather is hazy, the chances of your vehicle rolling over increases. All kinds of cars have the potential to roll over, however, the taller the vehicle, the more likely it is to rollover. This is true with SUVs, pickup trucks, and vans as they have a higher center of gravity.

According to the 2017 Florida Crash Report, 175 fatal rollover accidents were recorded, making overturns/rollovers the third most common kind of fatal crash in Florida.

What is the most common cause of a vehicle rollover accident?

One common cause of vehicle rollover accidents is when a driver engages in risky behavior such as speeding or swerving. When a driver speeds, they are more likely to lose control of their vehicle and are less able to slow down if there is a road obstruction or a parked driver in their way. Along with speeding, aggressive driving such as swerving, specifically at high speeds, is another common way of flipping your vehicle- especially when driving a heavily loaded truck. Another common cause of a vehicle rollover accident is driving intoxicated. In fact, nearly half of all fatal rollover crashes involve alcohol. Alcohol has serious repercussions when ingested before or during the operation of a motor vehicle. For one, the driver’s judgment is impaired, vision is blurred, and reaction time is slowed.

What car has the highest rollover rate? 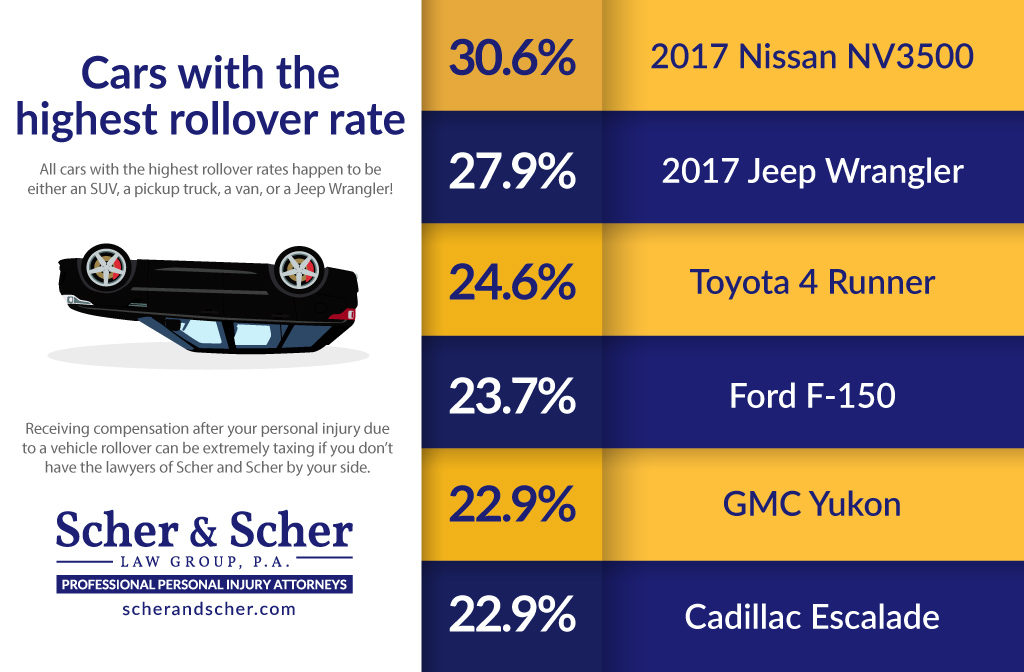 Receiving compensation after your personal injury due to a vehicle rollover can be extremely taxing if you don’t have the lawyers of Scher and Scher by your side. The Law Offices of Scher and Scher, P.A. are located in Hollywood, FL and are known to be extremely competent in their field of personal injury law. Our reputation of protecting and winning settlements for our clients has been proven over and over again. Call us now to schedule a free consultation in which we will conduct a case analysis and review your case as if we have already taken it on.

You pay nothing until we settle your case!
We assist with vehicle repair free of charge
Accident happened today? Speak to an attorney today.
Free consultation
Phone availability 24/7